Devon Mostert is the proud wife of NFL star, Raheem Mostert -currently a player for the San Francisco 49ers.

Devon’s NFL stud husband gave a stellar performance at the NFC Championship game, leading the 49ers to victory and to the Super Bowl LIV.

Born April 9, 1992; the Florida native attended New Smyrna Beach High School and went onto play college football at Purdue.
Raheem was actually at the verge of quitting football at the beggining of his career and he’s probably glad he didnt.
Undrafted and cut from a number of teams, Mostert rushed for a 49ers record 220 yards and four touchdowns in the team’s 37-20 victory over the Green Bay Packers -putting him instantly on the radar.
Prior to arriving to San Francisco in 2016, he had been cut by Philadelphia, Miami, Baltimore, Cleveland, the New York Jets and Chicago. Though he denifitely struggled to make it happen in the NFL, is safe to say Raheem relied on his wife Devon Mostert’s support. 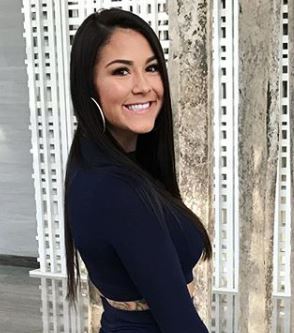 Devon Mostert was born Devon Beckwith on August 2, 1993; her parents are Kevin and Michelle Beckwith who are also parents to her sister, Jenna.
Devon, an Ohio native went to Chardon High School, where she was actually a member of the soccer team. She continued her soccer playing days at Purdue University -this means she knows all about being in a competitive sport. In fact, she also took on Taekwondo reaching a black-belt.
She holds a bachelor of fine arts in photography from Purdue -where she met Raheem. The two have been together since 2012. The two became husband and wife in 2017.
In addition, Devon Mostert is also STOTT-certified in Pilates and describes herself as an entrepreneur.

These days, the NFL wag also keeps busy caring for the couple’s son, Gunnar -who was born in July of 2019.
Find Devon Mostert on Instagram here.