Vita Volkova is the stunning wife of Russian UFC figther, Alexander Volkov -known as ‘Drago’ and who is in the top ten best MMA Heavyweight fighters.

Vita’s hubby will be facing Greg Hardy during UFC Fight Night 163 at CSKA Arena in Moscow. Drago was born Alexander Yevgenievich Volkov on October 24, 1988. He was born and raised in Moscow, Russia.
He made his pro MMA debut in 2009. He later earned his bachelor’s degree in engineering from Bauman Moscow State Technical University.

He later won the M-1 Global Heavyweight Championship in February 2016 before signing with the UFC later that same year. Volkov also won the fight of the night honor at the September 2017 UFC Fight Night.
He defeated Fabricio Werdum in the headlining fight at the March 2018 UFC Fight Night event, for which he won the performance of the night. 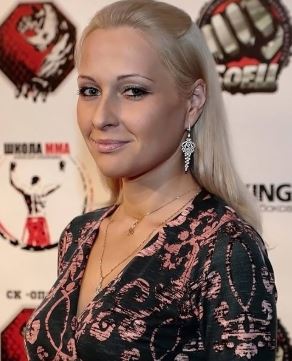 In addition to his success as a heavyweight champ, he’s also a family man. He and gorgeous wife Vita Volkova have been married for three years now.

Vita Volkova was born Vita Tolstosheina in Moscow, Russia. Though not much is known about the UFC wag, is safe to say she is her hubby’s biggest fan and supporter.
According to her social media, she worked for the Humanitarian convoy of goodness and is the co-founder of the brand Dental VOLK Technologies dentalvolk.com

She and Alex Volkov have been married for the past three years. They tied the knot in August of 2016. Last year on November of 2018, the couple welcomed their first child together, a baby boy. Is safe to say Vita keeps busy taking care of the couple’s child.