Andrea Brown is the lovely wife of UFC legend, Stephan Bonnar –who was recently arrested.

Andrea’s hubby is well known for his time during the UFC –where he was nicknamed “The American Psycho.” The former fighter was arrested on suspicion of driving under the influence, unsafe starting or moving of a stopped vehicle and resisting a public officer.

Recent reports indicate 41-year-old Bonnar was pinned to the ground and cuffed as he was arrested for DUI –his third offense.

Bonnar who is said to have been acting erratically had to be stopped by the public. He was said to be driving his red Cadillac on the I-15 freeway and was going speeds over 90 mph with unsafe lane changes. He was ultimately surrounded by vehicles and was forced to make a stop. When troopers arrived he was being restrained by fellow motorists. 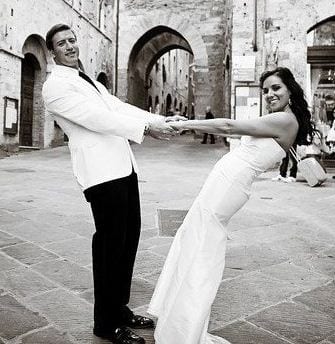 Bonnar used to be half of the most important fight in UFC history when he lost to Forrest Griffin in the finale of the first edition of “The Ultimate Fighter” reality show in 2005. That fight, a three-round war, is widely credited with being the spark that lit the fire that ultimately led MMA to being the sport it is today. Most recently, he has been performing in professional wrestling.

Stephan is currently married to wife, Andrea Brown who goes by Andrea Bonnar. The two were in a longtime relationship prior to their Italy nuptials in 2009. Since then, they have welcomed one son, Griffin Brandon.

Andrea Brown was raised along with one brother, Brandon Brown.

47-year-old Andrea Brown is an Edina, Minnesota native who attended Edina High School and later graduated from the University of Arizona –where she studied arts and psychology.

According to her LinkedIn, Andrea Brown began her career as a producer working for Hubbard Broadcasting in the mid 90’s. She then moved to Fox News Miami and also worked as a Special Projects/Consumer/Investigative Producer at FOX.

From 2007 until 2010, she served as PR Manager for MGM Resorts International. Most recently she assumed the role of publicist, stylist and talent manager for Stephan Bonnar Enterprises.