You are here: Home / UFC / Who is Santiago Ponzinibbio’s Girlfriend?

Santiago Ponzinibbio, the Argentine UFC fighter is set to appear at UFC Fight Night 140 and will face, Neil Magny.

Ponzinibbio was born in La Plata, Argentina on September 26, 1986; and has been fighting professionally since 2008 –after he began training in kickboxing at age 13.

The welterweight mixed martial artist gained fame for his time in the UFC. He rose in popularity for his appearance on The Ultimate Fighter Brazil 2, where he finished as a semi-finalist and the winner of both the fight and knockout of the season honors for his victory against Leonardo Santos.

Ponzinibbio –who is also known as ‘Gente Boa’ –earned the performance of the night honors as a headliner of the July 2017 UFC Fight Night in his victory against Gunnar Nelson. He had previously taken place in the June 2015 UFC Fight Night’s fight of the night. Prior to the UFC he worked as security, a janitor, assistant cook, book salesman and studied Physical Education but did not graduate.

Last December a cocky Ponzinibbio said ahead of his bout with Mike Perry “I’m faster, stronger, more complete, and prettier [than Perry]. Even my girlfriend is prettier than his.” 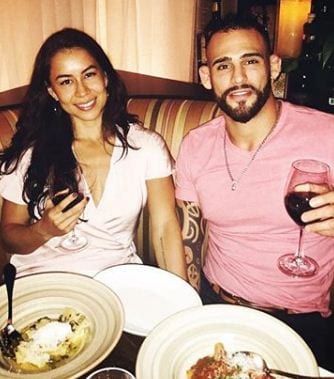 The comment made users crazy to find out who the alleged girlfriend was. At the time he was linked to a girl named, Ale Givens.

Fast-forward to present times, it is not clear whether the two are currently together. They do have pictures of each other on social media but we can’t confirm if they are romantically linked.

Givens who is based in Florida, is a fitness enthusiast who has participated in body building events in the past. In addition, she is an accessories designer who runs her own business, Alegria Handmade Jewelry.

The brunette stunner graduated earlier this year and holds a degree from Florida Atlantic University.