Jessie’s UFC stud was a college wrestler and criminal justice student at Iowa Central when he visited an MMA gym and took his first fight within months –then five more in the next 3 months, winning them all.

The mixed martial artist, is now a two-time former Light Heavyweight Champion of the UFC. Having won the title in 2011 and an interim title in 2016. He currently has the longest active winning streak in the UFC.

He has not only been successful in his professional life, Jones is also the long time partner of Jessie Moses with whom he has three adorable children. He is also the father of one daughter from a previous relationship.

Get to know the lovely Jessie Moses in her top facts below: 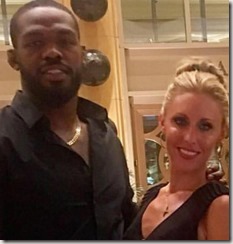 Jessie Moses was born in Endicott, New York. She is the daughter of Sheila Ryan –who is credited as the one who helped Jones, shape the mindset that has led to much of his UFC success.

3. Jessie Moses and Jon jones have been engaged since 2013.

After dating for several years, Jones popped the question to Moses in 2013, posting photos of his engagement on his Twitter account.

4. Jessie Moses is the proud mom of three daughters.

Jessie Moses is also the mother of the couple’s three daughters. She first got pregnant when Jones was a student at Iowa Central. Leah was born in 2008; Carmen, born in 2009; and Olivia Haven, born in 2013.

5. Jessie might be as tough as her UFC man.

Accoridng to a tweet from Jones, the three times Jessie has gone into labor, she did it without taking any epidurals.

6. They still haven’t been married.

Though the couple has been engaged for over three years a date for the wedding hasn’t been announced. It is believed the reason is due to his tight schedule, Jones splits his time between Albuquerque, New Mexico, where he trains, and Ithaca, New York, where Moses and his three daughters live.

While her man is busy doing his thing on the ring, the **** blonde has dedicated herself to the caring of their three adorable daughters.