Salina’s man has been named the third-best pound-for-pound fighter in the UFC but prior to his success in mixed martial arts, Cormier actually began his career as a wrestler.

Find all about Cormier, his family, career, children, wife and a lot more here!

Why Did Daneial Cormier Retire?

Since Cormier lost two fights in a row, according to him, it was time for him to retire so he announced his retirement in 2020 at the age of 41. 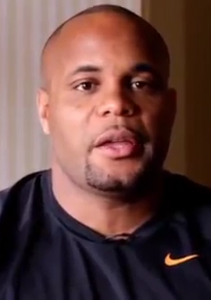 Why was Daniel Cormier Crying?

In UFC 214, Cormier lost to Jon Jones for the first time, and since he was someone who always came back with the winning medals, this time it wasn’t the same which made him cry.

Know about Cormier’s childhood days and how he moved up the ladder in his MMA career before we jump on to knowing more his wife.

Born March 20, 1979; the Lafayette, Louisiana native has an older brother, Ferral, younger brother, Joe, and a sister named Felicia. His stepfather is named Percy Benoit. His biological father was killed on Thanksgiving Day in 1986.

Cormier was an NCAA Division I Freestyle wrestler at Oklahoma State University. In 2008, he was the team captain of the U.S. Olympic wrestling team.

Cormier is no stranger to success, having been a two-time Olympic wrestler and six-time U.S. Open national champion, but he has also struggled with losses. At Oklahoma State, he lost the Division I finals. He finished fourth at the 2008 Olympics and never made it to the 2012 Summer Games after falling ill.

A stroke of luck came Cormier’s way when Alistair Overeem pulled out of the Strikeforce Heavyweight Grand Prix in July of 2011. The Strikeforce brass chose Cormier to take his place. 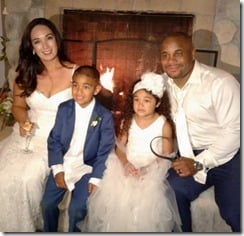 Cormier’s lovely wife is Salina Deleon whom she married last May. Prior to his nuptials to the pretty UFC wag, Cormier became a daddy while in college and was also previously married.

Who was Daniel Cormier’s First Wife?

Cormier married his first wife, Robin in November of 2002.

How did Daniel Cormier’s Daughter Die?

His daughter died in a car accident.

While attending Oklahoma State, Daniel Cormier and then-girlfriend, Carolyn Flowers became the parents of one daughter. Sadly, the couple’s daughter Kaedyn was tragically killed in a car accident in 2003. 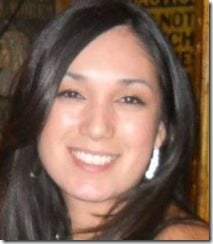 Salina Deleon and Cormier began dating around 2010. The following year the two became first time parents with the birth of son, Daniel Jr. At the time, Salina Deleon was referred to as Cormier’s fiancée.

In 2012 Salina Deleon gave birth to the couple’s second child, daughter Marquita Kalani. The two were finally joined in holy matrimony just a few weeks ago! They tied the knot on May 27, 2017, in Half Bay Moon, California.

Prior to becoming a UFC wag, the lovely Salina Deleon worked at Hooters in Fresno, California, her hometown. She and her husband and their two adorable kids currently reside in San Jose, California.

Know All About Salina Cormier

Want to know more about the lovely wife here? We’ll tell you all about her. Read on.

Who is Daniel Cormier’s Wife?

Daniel Cormier’s wife is Saline who was working as a waitress in a restaurant in her hometown. It is not sure how the duo met, but they’ve been happily married with two kids now.

Where was Salina Deleon Born?

Salina was born in Fresno, California.

Nothing is known of her educational qualifications but be sure to follow us as we keep things updated.

What is Salina Cormier’s Net worth?

Salina’s exact net worth is unknown.

The details about her family are unknown.

She’s an American with a Caucasian ethnicity.

There is no information available on her parents as of now.

Find the lovely wife and mother of two on Facebook here.

In Cormier’s UFC 210 match, he weighed a little more than the standard weight – he was 1.2 pounds more. He then went for a second weigh-in with the privacy towels where he held the towel close to him which gave rise to a controversy.  But he says that he didn’t realize he was doing so until he saw the photos. To know more about this incident, you can check here.

So you think you’re too old to play with G.I. Joes? Well then, it’s time you grew up and played with this awesome Daniel Cormier Limited Edition Action Figure! Buy three, one for your best buddy and another one for your wife! Please send pics of the fight!

Check out wags of other popular players here.