Cristina’s wife also known as ‘El Cucuy’ is currently signed with the Ultimate Fighting Championship. The 35-year-old is up against Donald Cerrone at UFC 238 in what’s being called the ‘People’s Main Event’

He earned the submission of the night at UFC 166 and won his third fight of the night honor with his victory in the main event at The Ultimate Fighter Latin America 3.

The Lightweight MMA competitor won the UFC Lightweight Championship in October 2017 with a defeat of Kevin Lee. He earned his shot in the UFC by winning The Ultimate Fighter 13 in 2011. 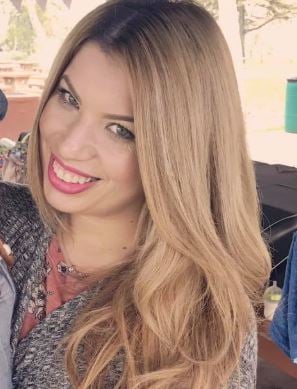 Tony who is Mexican roots through his father was born in California but was raised mostly in Muskegon, Michigan. In addition to his career, he is a happily married man. Meet his lovely wife, Cristina Servin.

Cristina Servin also has Mexican roots; she calls herself a ‘Jalisciense’ a reference to the Mexican state of Jalisco. However, she grew up in Whittier, California. She went to La Serna High and studied Business Administration – Finance at California State University, Fullerton.

The blonde describes herself as a businesswoman. Contrary to the Wag lifestyle, it looks like Cristina Servin is the type that likes to do her own thing and has believe it or not a nine-to-five job.

According to her social media she is listed as an Administrative Assistant at Wells Fargo.

She and Ferguson have been married since 2012. In addition to being a UFC wag, she is also the mother of the couple’s son, Armand Anthony who was born in April of 2016. The family of three is currently based in Costa Mesa, California.