Cristiane Dos Anjos is the lovely wife of mixed martial artists fighter, Rafael Dos Anjos -who will be the main card in tonights bout against Britton Leon Edwards.

Cristiane’s husband is a professional mixed martial arts (MMA) fighter and UFC lightweight champion (2015) as well as an accomplished black belt in Brazilian jiu jitsu (BJJ) under Aldo Januário, having competed for several years under the Gracie Barra academy banner in the sport jiu jitsu.

Rafael dos Anjos made his UFC debut in 2008. He earned Submission of the Night honors after defeating Terry Etim at UFC 112 on April 10, 2010.
He’s been happily married to wife, Cristiane for several years. Meet her below. 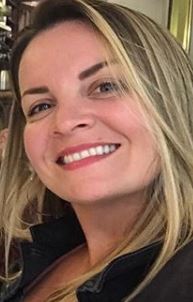 The couple who has been together since 2007, have welcomed two sons together. Cristiane gave birth to the couple’s first child, son Gustavo two weeks after his father’s fight at UFC 91 on November 15, 2008. Cristiane and Rafael welcomed their second son, Roginhdo Roger, on September 21, 2018.

#2 She is supportive of his career

Cristiane signed up to be the wife of a professional athlete and that means her support is vital for his scucess. She’s proven to be there for him specially when her fighter husband’s needs to be nursed back to health following his professional encounters.

#3 She has a son from a previous relationship

In addition to the two children she has with Dos Anjos, Cristiane is also the mother of 20-year-old son Gustavo who is believed to be Cristiane’s boy from a previous relationship. Gustavo is said to be following dos Anjos footsteps in and joins him during training.

The UFC wag and mom of three enjoys a low profile, not many details are known about her and she’s even set her Instagram on private.

On social media, Cristiane Dos Anjos writes “The Lord will always surprise us with something bigger and better than we seek. We are limited. But God is infinite”