Sable, the model, actress and former professional wrestler wife of WWE Brock Lesnar is a star of her own. The wrestling couple have been married since 2006 and together are the proud parents of two children.

Sable’s famous hubby won the NCAA Division I collegiate wrestling championship as a senior at the University of Minnesota, the WWE Championship within six months of his debut and the UFC Heavyweight Title in his fourth professional MMA fight.

The 6-foot-3, 266-pound was first scouted by WWE officials while smashing his way through the college wrestling ranks, Lesnar debuted on Raw March 18, 2002, and singlehandedly destroyed a ring full of unfortunate Superstars.

In 2014, Lesnar became the first fighter to beat The Undertaker in a WrestleMania.

Lesnar’s success in WWE and the UFC is unquestionable, but his wife, started in the business way before he did. 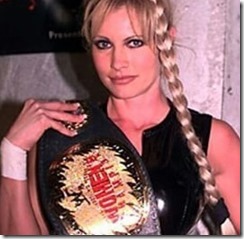 The former WWE Diva was born Rena Marlette Greek on August 8, 1967; she became a pioneer who broke new ground for the ladies of the ring. The Jacksonville, Florida native debuted in 1996 when she accompanied a young Triple H to the ring at WrestleMania XII.

Sable remained in the WWE spotlight, gaining major popularity. In 1998 she won the Women’s Championship from her nemesis at the Survivor Series. She landed on the cover of mainstream magazines like, TV Guide and Playboy.

She began wearing Hollywood shades and mocked her opponents with “the grind,” a move reminiscent of “Ravishing” Rick Rude where she gyrated her hips. Sable also began to taunt the WWE Universe by saying, “This is for all the women who want to be me and all the men who come to see me.”

Sable left WWE in 1999 but returned in 2003 and 2004 finding new rivals in Torrie Wilson and Stephanie McMahon. 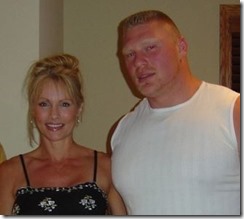 The gorgeous blonde has been married three times. She first married late husband, Wayne Richardson –who died in a car accident –the couple had a daughter named Mariah in 1991.

While in the industry, she met and subsequently married wrestler and former boxer, Marc Mero. The two tied the knot in 1993 but the former couple ended in divorce in 2004 after he became jealous of her success. 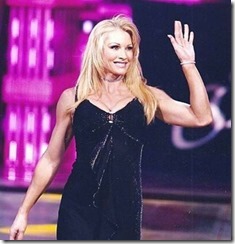 Following her divorce from Mero, she became involved with Lesnar, who is 10-years her junior. The two tied the knot in May 2006. Since then, the couple has welcomed two children.

Sable is also the stepmother of Brock’s twins Mya Lynn and Luke with his former fiancee Nicole McClain.

Sable is also a grandmother. Her daughter Mariah, welcomed a baby boy in 2012. Since her retirement in 2004 she’s been focusing in her sons and in supporting her hubby’s career.