Shealen Uaiwa is known as the longtime partner of professional fighter, BJ. Penn.

Shealen’s man is often described as one of the greatest fighters in the history of UFC. The Brazilian MMA fighter has competed in the Featherweight, Lightweight, Welterweight and Middleweight divisions in UFC. He is the second of only five fighters in UFC history to win titles in multiple weight classes.

Penn who is expected to retire later this year, has been in a relationship with the gorgeous Shealen Uaiwa for at least 10-years. 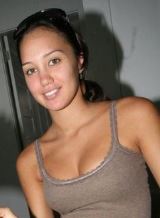 Born and raised in Maui, Shealen did some modeling work in the past, on an old ModelMayhem profile she wrote: “I just want to gain some experience in modeling, and get a portfolio started.” -She has kept a low profile despite being in a relationship with her famous man.
It’s not exactly known how and when the couple began dating. Despite not being married Penn, refers to Shealen Uaiwa, who goes by Shea as his wife. In addition she is the mother of the couple’s two children, daughters Aeva Lili’u born in 2008 and second girl, Kulia born in 2012.

Despite being his number one fan, is not clear if Shea and BJ are still together. In April this year, it was reported that the mom of two filed a temporary restraining order against Penn for years of physical and sexual abuse.
She alleged Penn verbally abused her in front of their two children and her mother and even threatened to kill her family.

In a detailed description, she wrote that she was afraid to report Penn behavior’s to authorities because of his name, reputation and the control of him over her life. She wrote, “I feel fearful for my safety and my children’s life and for the influence he has over my children”. Uaiwa added Penn hit her in the back of the head, wrestled her to the ground a few times during their years long relationship.
She also wrote he allegedly tried to force her to have intercourse with other man and would frequently yell at her when she refused to perform sexual acts.
Uaiwa further revealed the source of Penn’s problem is his drug abuse. She wrote that he had been a drug addict since he was 14 years old and used his training camps to try to stay sober.
The restraining order was obtained last year in October and has been extended to October 8, 2021. Since then, Shea who used to be active on social media has deleted her Instagram account.