April Davis is the lovely wife of UFC fighter, Derrick Lewis –who will be facing Daniel Cormier on the upcoming UFC 230.

April’s hubby is a UFC heavyweight champion best known as The Black Beast. Born February 8, 1985; the New Orleans, LA; native initially attended Kilgore College on a football scholarship before serving a three and a half year prison sentence for parole violation. He was introduced to mixed martial arts shortly after his release from jail.

The Heavyweight mixed martial artist, has competed across the Bellator, Legacy, and UFC promotions. He signed with the UFC in 2014 after having a two-year streak as the Legacy heavyweight champion.

He is 12-3 since joining the promotion in 2014. Currently he’s riding a 3-fight win streak, with KO’s over Marcin Tybura and Alexander Volkov sandwiching a decision over Francis Ngannou. Lewis shares along with Cain Velasquez a heavyweight record for most KO’s at 10. He’s held three titles, including the Legacy Fighting Championship Heavyweight Champion. 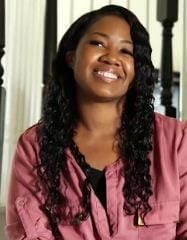 Lewis credits his lovely wife April Davis for keeping him in the right track. He said during an interview speaking about her “I definitely think I met the right woman to help me stir my path and keep me focus at all times”

The couple met through one of his cousins years ago. The two initially talked through the pone and began a relationship soon after. They were married in Honolulu, Hawaii, on June 17, 2017. Together they are the proud parents of three children, two boys and a girl.

As an interesting fact, earlier this year TMZ reported that April had banned her man from any intimacy following his comments about UFC fighter Ronda Rousey. Derrick committed the terrible mistake of publicly expressing he is hot for Rousey –to which April decided to punish him for a while.

Not much more is known about April Davis who keeps a low profile. The UFC wag and mom of three appears on her man’s Instagram from time to time.