David’s stunning and talented 19-year-old daughter just reached semi-finals at the French Open. This marks her first career Grand Slam semifinal. His daughter is one of the youngest players in the top 100.

Vondrousova is originally from Sokolov, Czech Republic but left her home at age 15 to live and train in Prague.

Marketa who turned professional in 2015, missed the second half of 2016 through injury, however she returned to the circuit in 2017 in startling fashion. She managed twenty consecutive victories and two titles accompanied this run – a 15k in Stuttgart and a 25k in Grenoble – before finally losing to Marie Bouzkova in the final in a 25k in Perth.

Since then, she has one singles title on the WTA Tour and seven singles and four doubles titles on the ITF Women’s Circuit -under her belt. Last month she reached her best singles ranking of world No. 38.

She began playing tennis at age 4 with her dad, David Vondrous. Her mother is Jindřiška Anderlová. David is also the father of Marketa’s younger sister, Julie. Marketa’s parents are currently separated. 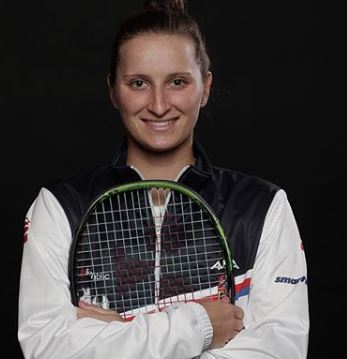 David is naturally very proud of his star daughter, in interviews to local media he’s said about her ‘I knew it from the beginning, Marketa showed she had everything it takes to become a great athlete’

During the interview, David Vondrous explained how his daughter excelled in soccer, learned to ski and even played ping-pong growing up. However, it was clear tennis won over Marketa.

David who was also drawn to sports growing up, adds that he is his biggest fan and supporter. The proud father also says he is terribly afraid of flying so he attends her matches only if they are driving distance.