Kristina Milkovic is the hot girlfriend of professional tennis player, Marin Cilic –his career-high ATP rankings is no.6, achieved on last November.

Kristina Milkovic’s boyfriend was born September 28, 1988 in Medjugorje, Bosnia-Herzegovina. The son of Zdenko and Koviljka –began playing at age seven.

But Marin isn’t all about tennis. In 2016 he received the Arthur Ashe Humanitarian Award after launching Marin Cilic Foundation in June 2016. The foundation provides young people improved access to education.

The 28-year-old also find time for his gorgeous girlfriend. Get to know Kristina Milkovic closer, reading her top facts below. 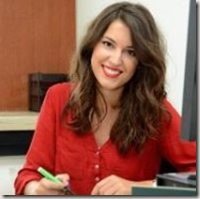 According to her LinkedIn, Kristina graduated from the University of Zagreb with a master’s degree in political science and psychology.

Kristina Milkovic is an employer branding and sourcing specialist. In 2016 she was named head of talent acquisition.

Kristina is fluent in Croatian, English, Italian and Spanish.

4. She is Marin’s long time girlfriend.

The couple has been dating for years. The two are believed to have been dating since 2010.

5. She is very supportive of her boyfriend

Kristina is a devoted tennis wag, she has been photographed many times attending and attentively watching Marin’s games. She was by his side when Marin was suspended for failing a drug test. The Court of Arbitration for Sport ended up reducing his ban from nine months to four in 2013.

6. Kristina has been credited for helping Cilic.

In a 2012 interview with Story.hr, Cilic joked that Milkovic is his private psychologist, since she’s available 24 hours a day.

7. She isn’t the jealous type.

During the same interview, he also has said that Kristina doesn’t get jealous of his female admirers because she knows where his priorities lie.

After he won his first ATP 500 level title in Basel, Switzerland in October 2016, Cilic told reporters that Milkovic is his good luck charm, Narod.hr reports

The black haired gal does not give interviews, choosing to keep her private life out of the public eye.

10. Miss Milkovic doesn’t have much of a public presence on social media.