Clemence’s boyfriend and fiancé is currently making his mark at the Australian Open. Born February 23, 1994; the French player started playing tennis at age 8. The son of Pascal and Lena, Lucas grew up with two brothers, Nicolas and Jonathan.

Lucas earned recognition when he received a wild card for the 2013 French Open where he made his first appearance in the Grand Slam event. In 2016, received ATP Most Improved Player of the Year Award. He has won several ATP tournaments including the Moselle Open in 2016 and the Hungarian Open in April of 2017.

The professional athlete also completed his baccalaureate degree at INSEP. 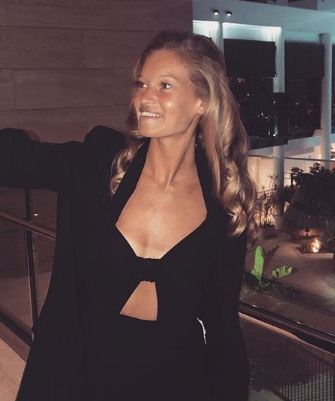 In addition to tennis, the 24-year-old also enjoys shopping, fashion and hanging out with friends and family. We can also add he enjoys spending time with the stunning Clemence Bertrand –the young woman he proposed to.

You can get a glimpse of the blonde at the player’s box, where she’s spotted cheering for her soon-to-be-husband. The two announced their engagement in August of 2018 so we expect their wedding to take place any moment now.

Though is not exactly certain how these two came to be they seem pretty comfortable with each other which could mean they have been dating for years; its pretty likely that they met during their high school days.

Clemence –who has model looks –was born in Lille, France in 1994. Is not clear if she has a fixed occupation but for now she is a professional tennis wag –as she is seen accompanying and cheering for her tennis stud all over. She attended school Fac STAPS LILLE 2 in France but according to her social media she is currently based in Dubai.

On her Instagram bio, she features a link to anther page “Girlz on Tour” –which apparently documents the adventures of three other laides: Julia, Noura and Steph.