Jackson’s girlfriend was born May 17, 1991; the Aussie native started playing tennis when she was eight years old and won her first professional tournament when she was 16.

She has under her belt three singles titles on the WTA Tour, as well as 11 singles and four doubles titles on the ITF Women’s Circuit. In 2016, she became the first female British singles player to be ranked in the Top 25 in 29 years. She also reached the top 100 doubles rankings that same year. 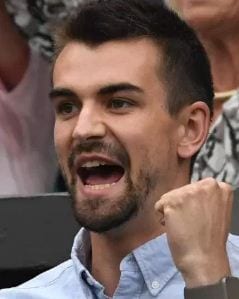 Konta who represented Australia from 2004 to 2012, but changed her allegiance after gaining British citizenship, has been in a relationship with beau, Jackson Wade.

The two have nothing in common since Wade happens to be interested in photography and movie making. According to his LinkedIn, Jackson Wade who is originally from Newton Aycliffe in County Durham –holds a degree in digital film making from the SEA Institute.

He currently runs his own business as the co-owner of 90SecondStory, which creates films and videos for other businesses throughout the U.K. Additionally he was hired as a videographer for the Lawn Tennis Association.

The pair have been reportedly dating since Konta’s victory in the 2017 Miami Open. Don’t be surprise to spot Wade on the crown since he is often seen   accompanying his lady and cheering for her from the stands, the two have become inseparable.

Wade may not be as popular on social media like his tennis star girlfriend but he does have a decent following of over 12k. You can check out his work on his website here and on Instagram here.