Alessia’s hubby is the most successful tennis player in the history of his native Luxemburg. Gilles was born May 9, 1983. He started playing tennis at the age of five and attended high school in Luxembourg and France.

He is the son of a retired postal worker father and a housewife mom, Miriam. Gilles has one brother, Patrick.

Muller became the first qualifier to reach the U.S. Open last eight since Nicolas Escude in 1999. He won the 2001 US Open juniors title ending as as World No. 1 junior.

Also known by his nickname, Mulles, he turned pro in 2001. That year, he reached ATP semifinals in Atlanta and Metz, earning a career-high $354,421 that season.

He wowed 2003 U.S. Open champion Andy Roddick in the opening round of the 2005 U.S. Open. His best Grand Slam performance came at the 2008 U.S. Open where he played through qualifying to reach the quarterfinals, losing to eventual-champion Roger Federer.

But he didn’t win his first ATP World Tour title until the 2017 Sydney International tournament in January.

The 34-year-old known for his strong groundstroke and powerful left handed serve, is also a happily married fella. Meet below the top facts about his wife, the pretty Alessia Muller. 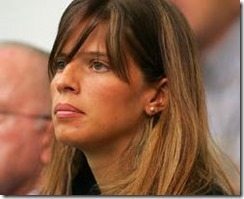 1. She is the former Alessia Fauzzi

Alessia Fauzzi, like her hubby, also hails from Luxemburg.

2. She met her husband as a teenager.

Even thought Alessia and Gilles met as youngsters it was until 2001 that they started dating.

3. She has been married for seven years.

After a long-courtship, nine years to be exact, she officially became Mrs. Muller on July 10, 2010.

Alessia Muller is the mother of the couple’s two sons. She and her hubby welcomed first child Lenny on May 6, 2011. They welcomed their second son, Nils on June 5, 2012.

5. She rarely misses her hubby’s matches

Though Alessia is much more private than her famous man, she is often seen attending Gilles’ matches, alongside their two adorable boys.

6. She and her family are based in Luxembourg

The family of four lives in Leudelange, a town in Southwwestern Luxembourg.

7. She is not into social media.

The lovely tennis wag and mom of two is apparently too busy to document her daily activities on the social platforms.