Jordan Caron is the proud and supportive boyfriend of professional female tennis player Eugenie “Genie” Bouchard. Jordan’s girlfriend is a Canadian player known for her mobility and her aggressive but unpredictable style of play.

Hunky boyfriend Jordan Caron is also a Canadian born. His famous girlfriend was born February 25, 1994. Genie was born to parents Mike and Julie Bouchard one of four children including her fraternal twin, Beatrice. Genie also has two younger siblings.

Currently ranked no. 59 in the world, the blonde began playing tennis when she was 5 years old and turned pro in 2009. She won won the Tevlin Women’s Challenger in 2012. That same year, she won the Wimbledon girl’s title. Then in 2013 she was named WTA newcomer of the year and to top it all off, she reached the semifinals of the Australian Open in 2014.

Also in 2014, Bouchard received the WTA Most Improved Player award.

Genie has been a busy girl both on and off the court. The 5 ft 10 in gal was said to be in a relationship with fellow tennis player Luke Bambridge. A couple of years ago she also sparked rumors of a relationship between her and Alex Galchenyuk, the young NHL player with the Montreal Canadians.

Since then she has moved on to current boyfriend, Jordan Caron. Meet him in his top facts below. 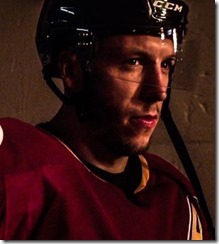 2. Jordan is also a professional athlete.

He is a professional hockey player who is currently a member within the St. Louis Blues.

3. He attended college in Canada.

He graduated from Athol Murray College of Notre Dame and was first drafted by the Rimouski Océanic in the 2006 QMJHL.

4. He made his NHL debut with the Bruins.

The Boston Bruins selected him in the first round (25th overall) in the 2009 NHL Draft and was included to the Bruins starting lineup for the 2010-2011 season.

Jordan was traded by the Bruins to the Colorado Avalancheon in March 4, 2015. He remained on the team until July after he accepted a one-year deal with the Blues.

Caron played for Team Canada during the 2010 World Junior Championships in Saskatchewan, Canada.

7. He is not shy about his relationship with Bouchard.

Caron posted to his Instagram the Sports Illustrated issue where his girlfriend is featured in, and quoted the image “Well.. @si_swimsuit is absolute this year ! Proud of you ”