Mark Hanson is the proud husband of professional tennis player, Gail Brodsky –who is grabbing headlines following her comeback to the game.

The daughter of Jewish, Ukrainian immigrants who settled in the Manhattan Beach neighborhood of Brooklyn when she was 2-years-old, Brodsky developed her game on public courts and became a tennis prodigy. She began making a name for herself a decade ago at the 2008 US Open. The then 17-year-old, earned a wild card thanks to her win against Coco Vandeweghe in the junior U.S. National Hard Court Championships. Brodsky lost in the first round of that Open against then-No. 14 Agnes Szavay but won over legions of fans with her enthusiasm.

Now 27, the wife and mother is hoping to “experience that feeling of being out there again” –and she’s certainly making the most of it.

Gail and Mark Hanson tied the knot in 2014 and since then have welcomed two children together. The two are the parents of two toddlers, 3-year-old-son Grayson and 2-year-old Brooklyn.

The couple met around 2012 and worked together at ESTC becoming close friends. They began dating a while later. 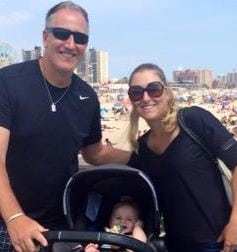 47-year-old Mark Hanson currently serves as a tennis coach at Kirkland’s Eastside Tennis Center. He has coached plenty of top level players and Gail credits him with teaching her to “enjoy tennis, and what it means to actually love the sport.”

According to his profile, Mark Hanson is a high Performance Coach & Excellence Programs. Prior to Eastside Tennis Center, Mark served as coach at Seattle University. He coached main draw players at all 4 grand slams and the BNP Paribas Open in Indian Wells and traveled to national and international junior tournaments with elite junior players.

He has been recognized by the USTA with awards for his superior tournament organization, service and coaching excellence. Mark also directed Big Game Academy in Tacoma for over 10 years and has coached numerous USTA regional camps.