Fee Maeueler is the stunning girlfriend of tennis star, John Millman –currently doing his thing at the Australian Open.

Fee’s tennis star boyfriend was shot to fame when he beat the great Roger Federer in the US Open in 2018.

Millman was born June 14, 1989; he began playing tennis at age 4 following in his sisters footsteps. He is the son of Ron and Shona; and grew up with sisters, Shona, Kara, Tessa and Bronte. His father owns a tennis centre.

Millman turned pro in 2006; the six-foot right-hander claimed his maiden ITF Futures Pro Circuit singles title in Traralgon in 2008. He then secured his first Challenger title in Sacramento, USA in 2010, the same year he broke into the world’s top 200. 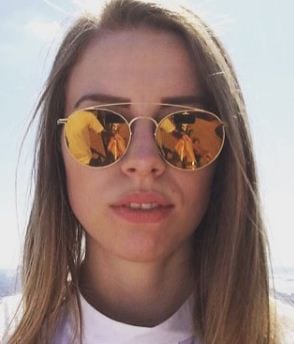 He made his Olympic debut in Rio where he won his first round match 2-0 against Ricardas Berankis. Millman came close to causing a major upset on centre court at the Olympic Tennis Centre in Rio when he led fourth seed Kei Nishikori in both sets, only to eventually go down 7-6 6-4.

In addition to tennis, John enjoys movies, music, running, football and golf. His favorite bands are The Killers and The Temper Trap. He is a huge fan of Liverpool F.C.

Millman is also a man in loved. He and Fee Susan Maeueler have been dating for a few years now.

The couple met after they struck up a conversation while at a tennis club in Germany. John was there playing and Fee was behind the counter making coffees. That was about two years ago, time they’ve been in a relationship.

Fee Maeueler worked part time at the club which is owned by her grandparents. The blonde worked there while also pursuing a degree in fashion marketing.

When speaking about his lovely girlfriend Millman told the Courier Mail, ‘She’s been a rock solid support of mine through the times which haven’t been so good. That’s a great trait in someone.’