Corey Gauff is the proud father of tennis sensation, Cori Gauff -whom you may know best as Coco.

Corey’s teen daughter strikes again defeating champion Naomi Osaka with a 6-3 6-4 victory to reach the fourth round of the Australian Open.
15-year-old Cori who is widely known as Coco -made history as the youngest ever female finalist in the US Open singles event and the youngest ever to qualify for Wimbledon -where she defeated 5 time champ Venus Williams.

Her achievements also include winning the 2018 Junior Roland Garros and the 2018 Orange Bowl Singles. She made her WTA debut at the Miami Open in 2019.
Coco who began taking tennis in second grade and was 7 when her family moved to Florida so she could pursue a career in Tennis, comes from athlete parents. 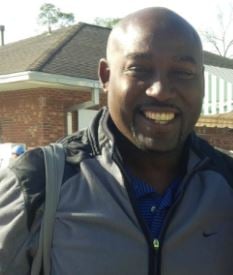 Corey Gauff is a former college basketball player while his wife, Candi Gauff ran track at Florida State University. The couple are also proud parents to Coco’s younger brothers Codey and Cameron.
Corey Gauff who was born in New Orleans but grew up in Delray Beach, Florida; played college basketball at Georgia State University. He played guard for the Georgia State Panthers men’s basketball team.
In addition to being her father, Corey serves as Coco’s primary coach. Prior to becoming Coco’s coach, Corey worked as a healthcare executive.
During an interview, Corey Gauff revealed is not easy to balance his father-coach roles -which means he needs to make sure his daughters is feeling ok, and at the same time get his player to ignore what she’s feeling and perform her best anyway.

Cori’s mom has nothing to envy on her husband; she was a gymnast before becoming a track-and-field star at Florida State University. Candi Gauff who was born Candi Odom was described a ‘star track athlete at Florida State in the late ’80s & early ’90s’
The proud mother and wife now serves as her daughter home-schooled teacher.