David’s wife is well known for her accomplishments in tennis. The 29-year-old rose to prominence with a series of junior championship wins when she was in her mid-teens.

She turned professional in 2005 and has won 630 career singles matches and 30 career titles. She was the world No. 1 in 2010 and 2011. She has earned more than $35 million in career prize money.
She earned her first world number 1 ranking in October 2010 and her first grand slam victory after winning the Australian Open in 2018. She reached the finals of the US Open in 2009 and 2014. The talented blonde has also signed sponsorship agreements with Adidas, Sony Ericsson and Turkish Airlines. 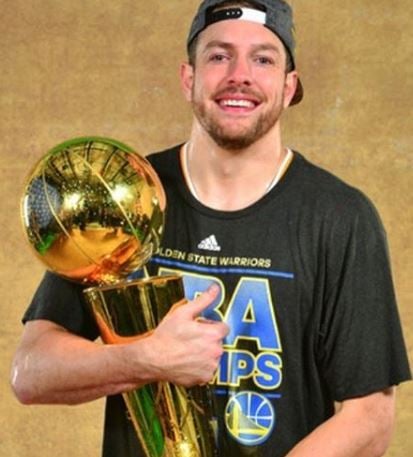 David Lee tied the knot to Wozniacki back in June after getting engaged two years prior; and 2019 has proven to be a big year for the blonde who did not only became a married lady but has also announced her retirement from tennis.
Formerly the top-ranked player in the world, will play the 2020 Australian Open as her final tournament. However, Caroline seems to have everything she’s ever wanted including her new man.

David Lee is a former NBA All-Star who played college basketball for the Gators of Florida. The Missouri native is best known for winning an NBA championship in 2015 with the Golden State Warriors.

Lee, a 6 ft 9 in, and 245 lb power forward -retired in 2017, after 12 years in the NBA. He last played for the San Antonio Spurs during the 2016-17 season. He averaged 13.5 points, 8.8 rebounds and 2.2 assists in 12 seasons with five teams.
Most of Lee’s best basketball came during a five-year run with the Golden State Warriors. He made the All-Star team and was a third-team All-NBA selection in 2013, emerging as one of the league’s best offensive big men.
The Warriors then shipped him to the Boston Celtics for a frustrating half season before he landed with the Dallas Mavericks. In Dallas, Lee returned to a high-efficiency role within the offense and seemingly found a niche as an 18- to 20-minute player.