You are here: Home / Soccer / Who is Diego Costa’s Current Girlfriend?

Diego Costa, the Brazilian soccer player for Atletico Madrid and the Spanish national team –appears to be in single land.

Costa who seems to be a popular fella among his peers with over three millions followers; and seem to be a guy with great family values; however he seems to be unfortunately single for the time being. However, with professional players is always hard to tell if they are just being super private. He may as well be in a committed relationship and is just, not ready to show-off the lucky lady.

Having said that, there is no clear sign of any female presence on his social media so, the question remains: who is Diego Costa’s current girlfriend? 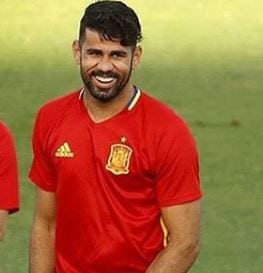 Born Diego da Silva in Logarto, Brazil in 1988 and had a number of unsuccessful trials with local clubs. However he ended up in Europe thanks to sports agent, Jorge Mendes.

Since, then Costa hasn’t look back and has really made the most of his opportunity –becoming a Premier League and La Liga star.

Since he never actually played for the Portuguese side and has excelled on since arriving at Atletico Madrid, the FA made a request to switch Costa’s international eligibility from Brazil to Spain in 2013. According to the Sun, Costa’s switch was granted and he made his debut on March 5, 2014, just months before the World Cup in Rio. He has gone on to net 9 goals in 20 caps for Spain.

Could it be that Costa’s true love remains in his native Brazil?