Vanja Bosnic is the proud soccer wag married to player, Luka Modric –best known as a midfielder for Real Madrid.

Vanja’s husband was born September 9, 1985; The Croatia native began his youth career playing for Zadar in 1996, and his senior career began in 2003 with Dinamo Zagreb. He was named Bosnian Premier League Player of the Year in 2003. Three years later he became a member of the Croatian national team in 2006.

Luka has been married for a few years and his wife happens to work for him. 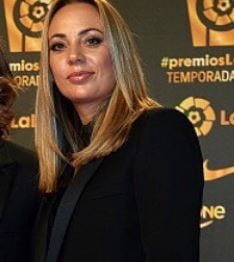 Vanja Bosnic became Mrs. Modric back in 2010, the couple tied the knot in their native Croatia. Vanja Bosnic is an agent, most importantly is her husband’s agent.

The long legged, green eyed blonde was an agent back at the time when her man was moved from Dinamo Zagreb to Tottenham Hotspur. The transfer was arranged at the office of Maria Mamic –with the other officially registered agent being Vanja.

The two first talked over the phone and something clicked with the conversation going for three hours. They ended up tied the knot in 2010. The pair welcomed a son, Ivano soon after their nuptials and are also the proud parents of two daughters, Ema and most recently, Sofia.

Vanja Bosnic is five years older than her soccer player husband, she studied economics prior to working as a sports agent – It is not entirely clear whether she is still an active agent for players other than her husband. The soccer wag and mom of two is not into social media and prefers to stay out of the spotlight, however her long-haired star player often shares photos of the family on his social media profile –where he has over 11 million followers.