Rosmari’s longtime hubby currently serves as the current manager of Brazil’s national team. Born May 25, 1961; he is a former defensive midfielder and was featured for such Brazilian clubs as Caxias, Esportivo-RS, Portuguesa and Guarani.

He embarked on his coaching career in 1990 and has since managed a number of clubs including Guarany de Garibaldi, Veranópolis, Ypiranga de Erechim and Juventude. He won the Campeonato Gaúcho with both Caxias and with Porto Alegrense club Grêmio. 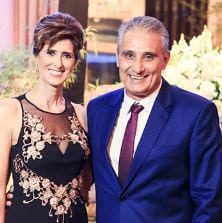 Tite was in charge of São Caetano, Corinthians, Atlético Mineiro, Palmeiras and Arab side Al Ain. But he enjoyed better fortune at the helm of Internacional in the 2008/09 season.

In 2010, Tite returned to Corinthians and enjoyed a meteoric rise there. In 2011, he made the top-flight club the Campeonato Brasileiro Série A champions and in 2012 recorded the Copa Libertadores de America victory. He left the club in 2013. He was called for the national coaching job in 2016.

Tite has been married to the lovely Rosmari Rizzi for decades. Together they are the parents of two adult children. Rosemari Rizzi Bachi, who goes by Rose is a partner at Tite Marketing Ltda.

She’s been a loyal fan and supporter of her hubby’s career. The couple welcomed their first child, a son named Matheus Rizzi Bachi on January 8, 1989. Matheus is also a footballer who played for NCAA Division II soccer at Carson-Newman University and is currently a football coach. Tite and Rosmari Rizzi Bachi are also the proud parents of daughter, Garbiele Rizzi Bachi.

The longtime couple are also grandparents to their son’s first child, Lucca –born in 2017. Matheus is married to high school sweetheart, Fernanda Hundertmarck Silva. The two tied the knot in 2016.