You are here: Home / Soccer / Who is Thibaut Courtois‘ girlfriend?

Thibaut Courtois the Belgian goalkeeper who plays for F.C Chelsea is apparently too busy to have a girlfriend.

The 6 ft 6 in player shows no signs of being in a happy and committed relationships and it seems everything on his mind revolves about football. But who could blame the handsome 26-year-old after all he is currently in Russia at the FIFA World Cup –kicking ****.

The towering player seems to be currently single this days, however with professional athletes you never know. For all we know he could be keeping his special lady under wraps just because is perhaps in the first stages of a relationship or because he doesn’t want to expose her to media scrutiny. Either way, is just a matter of time for Thibaut to be officially taken, after all, he’s got the talent, the looks and the money. He is definitely a winner.

Not so long ago, Thibaut was in a relationship with Spanish gal, Marta Dominguez –the mother of his two children, Adriana and Nicolas –however the two split in 2017. 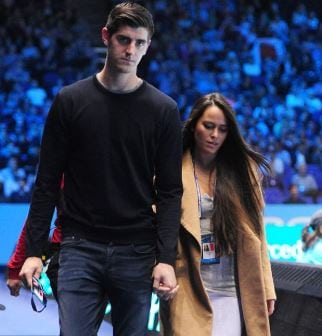 Born May 11, 1992; the Bree Belgium native began his youth career as a left back for Bilzen V.V. Athletics and talent runs in the family with his sister, Valerie Courtois being a professional volleyball player.

After joining the youth division of K.R.C. Genk, he became a goalkeeper. Following his signing by Chelsea, he spent three seasons on loan at Atletico Madrid.

Since then, the goalkeeper has played for Chelsea FC, the Koninklijke Racing Club Genk, and Atletico Madrid. He also played on Belgium’s national team. At 19, Thibaut became Belgium’s youngest ever keeper when he took to the field for a 2011 meeting with France.