Sue Bird is the lovely and talented girlfriend of female professional soccer player, Megan Rapinoe. The two have been dating for years now.

Sue’s girlfriend who plays for Reign FC and is also co-captain, is competing in the Women’s World Cup, as a member of the US national team. There’s no doubt the 33-year-old forward has delivered for the United States in the biggest of moments—perhaps most memorably in overtime against Brazil in the quarterfinals of the 2011 World Cup.

Megan has also continued to turn out big-time goals and big-time assists in the 2012 Olympics and 2015 World Cup. However, partner, Sue Bird doesn’t stay far behind as a star athlete in her own right. Check out her top facts below. 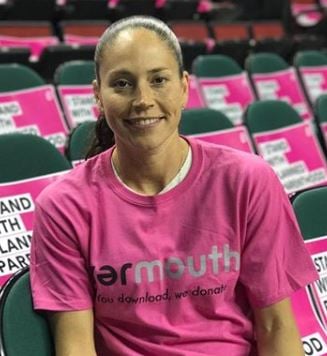 The 38-year-old was raised by parents Herschel and Nancy Bird in Syosett, New York . She attended Christ the King H.S. (New York) where she won two state titles and was the MVP of the 1998 state tournament. She was recruited by Stanford and Vanderbilt, but ultimately decided to go to UConn.

Bird immediately became their starting point guard. She lead them all four of her years as a started becoming a deadly three-point shooter and left the school with over a 90% average from the free throw line. Twice, in 2000 and 2002, her UCONN team won the NCAA Championship. During her senior year, the Huskies went an incredible 39-0 during the season. At UCONN, she was a Dean’s List academic student and an All-American and is one of their best players in history.

Sue is a three-time WNBA champion who’s about to start her 17th season in the league. She has played her entire career wiht the Seattle Storm Basketball team.

#4 She is also an Olympic champ

Bird has had a lauded career, among her accomplishments we can mention she won a Gold Medal in the 2004, 2008, 2012 and 2016 Olympic Games; 2002, 2010, 2014 and 2018 FIBA World Championships, 2009 UMMC Ekaterinburg International Invitational, 2008 FIBA Diamond Ball Tournament, 2007 Americas Championship, 2002 Opals World Challenge and the 2000 R. Williams Jones Cup.
She is one of only a few female basketball players to win an Olympic gold medal, an NCAA Championship, and a WNBA Championship.

#5 She wears the number ten for a reason

According to a profile, Sue wears number 10 on her jersey because she and her sister Jennifer were both born in October (the 10th month)

Bird who was taken first overall in the 2002 draft, stated during an interview “It’s pretty crazy. When I first got drafted I remember being like. ‘Where am I going? What? This is so far. I don’t want to go out there,’ ” “And now, I can’t imagine not being drafted by the Storm.”

In the summer of 2017, the usually-private Bird revealed in an interview with ESPNW that she’s gay and dating Rapinoe. She previously dated singer Nick Carter in 2002.

#9 She and Megan live together

After dating for about a year and a half, the Reign’s Megan Rapinoe moved into Storm star Sue Bird’s Queen Anne condo in 2018.

#10 Her partner might not be invited to the White House

In 2016, the outspoken midfielder publicly demonstrated her support for then-49ers quarterback Colin Kaepernick and the Black Lives Matter movement by kneeling during the national anthem before Reign games. She’s also been vocal about the pay differential between the U.S. men’s and women’s national soccer teams, and has been a strong advocate for LGBTQ rights.