Sara’s husband recently signed a contract with the Los Angeles Galaxy following a transfer from La Liga side, Sevilla. The 31-year-old who also plays for Mexico national team is regarded as the team’s all-time leading goal scorer, with 52 goals in 109 appearances and has featured at three World Cups, scoring four goals across the tournaments. He has also won two Gold Cup championships with El Tri.

Hernandez has spent the last decade in Europe, originally joining Manchester United from Chivas de Guadalajara in 2010. In addition he’s had stints with Real Madrid, Bayer Leverkusen and West Ham.

He joins the Galaxy after half a season in Spain, making 15 appearances across all competitions for Sevilla. Prior to his move to Andalusia, he spent two seasons with West Ham, two with Bayern Leverkusen and one, on loan, with Real Madrid. His four seasons with Manchester United, which included starting in a Champions League final, remain his personal bests at the club level.

There’s no question, Hernandez is a superstar with legions of fans all over the world. However, the title to biggest fan and supporter goes out to his stunning wife, Sarah Kohan.

The stunning brunette was born in Sydney, Ausrtalia on March 6, 1994. The gorgeous lady has Romanian heritage. 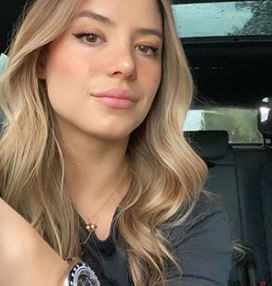 They tied the knot in March of 2019. Since then, the couple has welcomed a son. Sarah gave birth to a baby boy whom they named Noah -on June 2019.
In addition of being famous for being Mrs. Hernandez, Sarah Kohan has made a name for herself as a travel blogger and fashion model.
The self-proclaimed travel junkie and adventurer has traveled the globe to places such as London, France, Thailand and Maui. Also a model, she has been represented by Elite London and Insanity Group, among others.
But Sarah Kohan is not only a pretty face, the soccer WAG attended Harvard University and holds degrees in Law and Commerce. She graduated from Notre Dame doing a law degree in 2018, having completed exchange courses at prestigious Harvard and Columbia universities.

You can find Sarah who goes by ‘moonstrucktraveller’ on Instagram here.