You are here: Home / Soccer / Who is Samuel Umtiti’s Girlfriend?

Samuel Umtiti, the French professional soccer player best known as a center back for Barcelona is apparently single.

There’s no sign of any special lady in his life these days, however with professional athletes it’s always hard to tell. For all we know, he could be keeping his lady out of the spotlight because it’s a new romance or because he doesn’t want to expose her to media scrutiny.

Last year he was romantically linked to Alexandra Dulauroy however the relationship was just a rumor. Either way, is just a matter of time for Umtiti to introduce a lady friend. The smiley soccer star seems to be close to a woman named Rose Cecilia however, he calls her his bff. 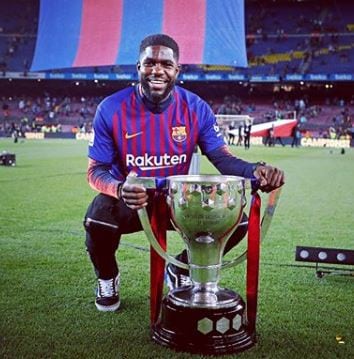 Born November 14, 1993; the Cameroon native spent his first couple of youth years with Menival before spending the next decade training in the Lyon youth program.

During his seven-years with the Lyon senior club, Umtiti became a key player in the Olympique defence, having played 97.2% of the minutes in the games where he has been used. He was only 18 when he made his official debut for Olympique on 8 January 2012 against Lyon Duchère.

In 2016, the center-back became a member of the France national team and Spanish club FC Barcelona.

It appears for now, the 24-year-old soccer star is devoted to his career and the only woman in his life is his lovely mom. When not doing what he does best, Samuel Umtiti seems to enjoy spending time with his family and needless to say he is popular among those close to him.

For more on Samuel Umtiti, check him out on Instagram here.