Michela Persico is the gorgeous girlfriend of professional soccer player, Daniele Rugani -who is currently a player with Juventus F.C.

Michela’s soccer star boyfriend is said to have tested positive for the deadly coronavirus, joining one of the thousands who have been affected by the disease in Italy -which is now in total lock down.
According to reports was exposed to an infected Serie C team. He is the first player from the club to be confirmed as having tested positive for coronavirus.

Rugani was born July 29, 1994; the Italian native grew up playing with both Juventus’ and Empoli’s youth team before making his senior debut with Empoli in 2013.
He was named Serie B Footballer of the Year in 2014 after helping Empoli earn promotion to Serie A.

Italian international center back who served as a reserve during Italy’s Euro 2016 semi-final run, although he did not appear in any games. He signed with Juventus of Serie A in 2015.
Rugani has been at Juventus his entire senior career. All in all the Italian has played 94 times for the Serie A champions, winning four league titles. 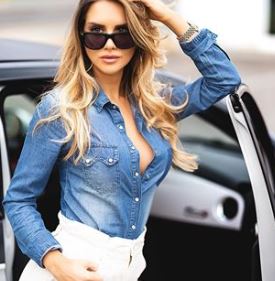 He has been in a relationship with fellow Italian Michela Persico who is a well-known sports journalist. The Italian stunner hails originally from Bergamo.
She began working in small networks, quickly becoming a highly appreciated sports journalist. Later she worked on TeleLombardia and TgCom24, while Nicola Savino chose her as commentator on the broadcast Quelli che il calcio.
She met Rugani by chance at a tennis match in Brescia a few years ago. The two later reunited after she was commisioned by Mediaset to do an interview to the player.

She wrote on social media after her man’s positive coronavirus result ‘He is already well! It is positive but asymptomatic. No symptoms. This is why Italy recommends everyone to stay at home! Because in many cases you have it without even knowing it! Let’s help each other and everything passes’