Megan Davison is the stunning girlfriend of English soccer player, Jordan Pickford –best known as a goalkeeper for Everton.

Megan’s soccer beau is also a goalkeeper for the English National Team, he made his senior England debut in November 2017.

Born March 7, 1994; the Sutherland, England native was part of Sunderland’s academy, reserve, and senior teams beginning with their youth system in 2002. While with Sunderland, he was loaned to six other squads –and was named Goalkeeper for the Premier League club Everton FC early in 2017. 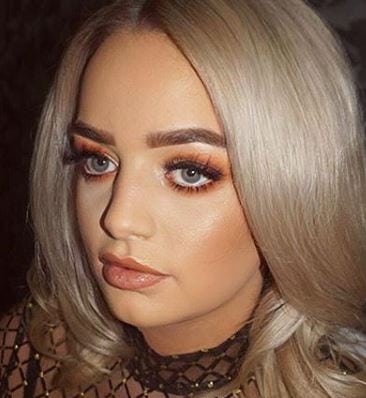 The 24-year-old got his first call-up from the full England national team for the 2018 World Cup qualifier against Slovenia in 2016. He was the England Under-21 Player of the Year in 2017.

Luckily for Jordan, he’s got by his side one of the most loyal girlfriend’s we’ve seen, Megan Davison. The pair met while in high school and have been together since they were teens.

Davidson is a huge soccer fan and has been her whole life, she is constantly supporting her beau and often posts photos of them hanging out together. She attends nearly every match and of course is also in Russia where she got major media attention for wearing a huge diamond –sparking engagement rumors.

When not cheering for her man, 22-year-old Megan keeps busy with her day job within the make-up world –the curvy blonde is a make-up expert and thanks to her skill she’s always looking on point. Megan loves all things luxurious and she enjoys a comfy lifestyle thanks to her relationship with Pickford.

The stunner is also a college graduate, according to the Sun, she graduated last year from University of Sunderland, though her major is not known. Megan who calls herself Megs on social media has earned over 25K followers. Neither has confirmed their engagement.