Marine Lloris is the lovely wife of French goalkeeper, Hugo Lloris –best known as a player with the English club, Tottenham Hotspur.

Lloris was named Ligue 1 Goalkeeper of the Year three consecutive years with Lyon. He spent four years with the club and three more with Niece before joining Tottenham Hotspur in 2012.

Also in 2012, he tied the knot to then longtime girlfriend, Marine. Marine was born August 7, 1986 in the South of France.

The couple met back in 2002 and tied the knot 10 years later in a romantic ceremony in Nice. They met while in high school, attending the Lycée Thierry Maulnier in Nice.

She moved with him to Lyon when he joined Olympique Lyonnais. In parallel, she enrolled at the university and earned a degree in human resources. The rest is history. 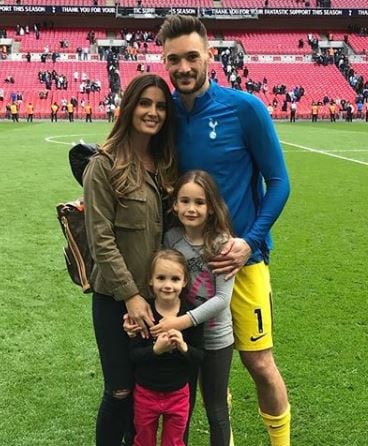 The two are the proud parents of two young girls, Anna-Rose and Giuliana.

Marine Lloris has degrees in both law and human resources and in addition of being a soccer wag and busy mom, she is also the owner of high-end children’s clothing brand Manège en Sucre. Her clothing line was featured in Vogue UK in late 2017

That can explain Marine’s amazing taste in fashion in why she and her girls are always looking on point.

Marine Lloris also finds time to be a supportive wife, she’s been pictured numerous times supporting and cheering on her man from the stands during matches.