Maria Salaues is the stunning girlfriend of football star, Paul Pogba –a gifted midfielder best known for his work with Manchester United.

Maria’s soccer beau is also a player with the French National Team; he made his debut with Manchester United in 2011. Born March 15, 1993 in France, Paul played youth soccer for Roissy-en-Brie from 1999 until 2006.

He signed with Juventus in 2012 and played there until 2016, when he rejoined Manchester United. He also joined the French national team in 2013. He was named Best Young Player at the 2014 World Cup Tournament.

Paul and his girl, Maria have sparked engagement rumors after the stunner appeared in Russia to support her man while he plays in the FIFA 2018 World Cup. So who is the possible Mrs. Pogba? 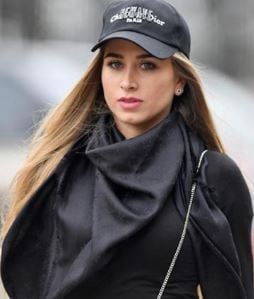 The 23-year-old blonde actually hails from Bolivia and is said to come from a wealthy family. Born Maria Zulay Salaues Antelo, she had a comfy upbringing and is to have studied business administration at the University of Bolivia.

After graduation, she moved to Miami where she began working as a local estate agent. In addition to her day job, Maria Salaues also keeps busy doing some modeling. The pair is said to have spent most of the summer together in L.A. –and rumors say they may be heading to the altar.

On the other hand, is also unlikely since they haven’t had much time since both keep busy schedules. With Maria busy in Miami it gets difficult to visit her man in Manchester. The two have been pictured together a couple of times, first enjoying a meal at iconic Manchester restaurant, Wings –and also at an Adidas shoe launch in the shadow of the Eiffel Tower. Pogba’s mother was also at the shoe event so that means, Maria has the approval of her future mother in law.