Larissa’s hubby began his youth career with Juventus-Sp in 1999 at age seven. Born August 13, 1992; the Sao Paulo, Brazil native won a silver medal with the Brazilian national team at the 2012 London Olympics.

The midfielder previously played with Paris Saint-Germain after a stint for Sao Paulo from 2010 to 2013.

But 2016 was a big year for Lucas who tied the knot to his stunning wife, Larissa Saad. Meet her in her top facts below. 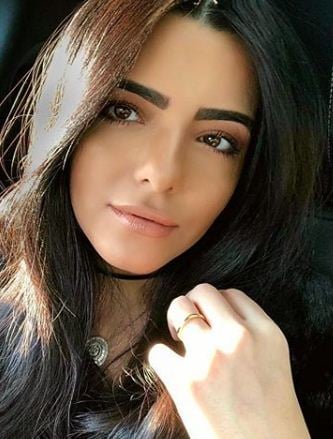 #1 She isn’t just a pretty face

But Larissa isn’t just an incredibly pretty face. In fact, the brunette beauty finished a business degree. Nowadyas, she is perhaps best known for being a soccer wag and for posting stylish selfies along with family and friends.

#2 She enjoys a low profile

She rarely does interviews or photo shoots, preferring to keep her life private. During an interview for the website Gshow, Larissa admitted that she’s shy when it comes to living a public life.

#3 They were introduced by a mutual friend

The pair officially started dating in 2015, but they’ve known each other far longer than that. The two were close friends at least for four years prior to getting together. They were set-up by a mutual friend called Thiago Nicacio, who works for Lucas.

#4 She comes from a wealthy family

Larissa Saad was born January 7, 1992; she is the daughter of Graciela Saad. According to Brazilian press, Larissa is a girl that comes from a very wealthy family in Sao Paulo. She is also part-Lebanese

Larissa and Lucas tied the knot on December 23, 2016 in a ceremony in Brazil. They welcomed their first child last year. She gave birth to their son, Miguel on November 13, 2018. Larissa is currently pregnant with the couple’s second child.