Meet lovely Ulla Sandrock, she is the stunning wife of lauded football manager, Jurgen Klopp –currently the manager of Liverpool.

Ulla’s German husband played for 1. FSV Mainz 05 for his entire career from 1989 to 2001, he was a striker and defender. He then began his managing career for the team starting in 2001 until 2008. Next stop was a managing stint at Borussia Dortmund until 2015 and since then, he’s been Liverpool’s main man.

He was named German Football Manager of the Year two straight years in 2011 and 2012. There’s no doubt the Liverpool boss has been successful both on and off the field, if you have any doubts just check out his gorgeous wife, Ulla Klopp.

He was first married to Sabine Klopp with their marriage ending in 2001. From his first marriage he is the father of a son, Marc Klopp born in 1988 and who is a former Borussia player. 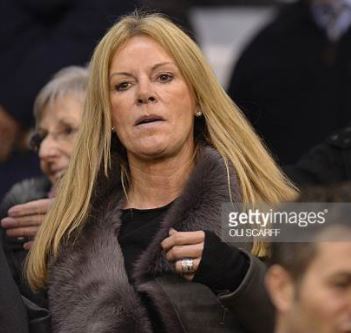 Klopp met second wife, Ulla Sandrock at a pub in 2005. At the time, she was working at a bar at the Munich Oktoberfest.

The two tied the knot on December 2005. Ulla, like Klopp, was also in a previous marriage. She is the mother of one son, Denis.

Ulla who is in her early 50’s, began her career as a teacher working for at least three years at a German school in Nairobi. The stunning blonde later transitioned to writing and is now described as a children’s novelist. According to Fabwags, she published her first book, Elli and Pit in 2005.

Her book Tom and the Magic Football, was published in 2008, a sequel of the book was written in 2010.

Speaking about the book, she told German newspaper Der Spiegal that the her aim was to illustrate the “fascination of football” and “the longing for a distant hero world”

The blonde has been very supportive of her husband’s career and is a regular at Liverpool games.