Julia Guimaraes is a sports journalist hailing from Brazil and currently on assignment at the World Cup in Russia.

Julia who is employed as a journalist for TV Globo in the sport section, is the latest female reported to be attacked at the world famous sporting event. During her live coverage of the 2018 FIFA World Cup in Russia, she was approached out of nowhere by a stranger who attempted to kiss her while she did her job.

The stranger who jumped on her shoot out of the blue was left certainly disappointed and even shamed when a brave Julia dodged his kiss attempt and demanded for an apology, also telling him his behavior was ‘unacceptable.’ Guimaraes has since been praised for denouncing the sexual assault. 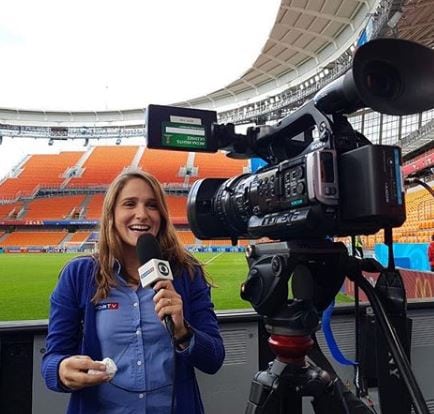 Unfortunately, Julia Guimaraes is not the only female reported to have suffered such encounters. A few weeks ago Colombian reporter, Julieth Gonzalez was talking on camera when a man grabbed her breast and kissed her cheek. Unlike Julia Guimares, Miss Gonzalez kept her composure and finished her report. Moments later however, she took to social media to denounce the incident.

Julia, the staff journalist for Brazil’s TV Globo and sportv, can be heard on a video viewed over two million times,

Julie who shared the video herself on her social platforms also said this was the second time this kind of incidents happened to her while in Russia. She was standing in front of the stadium in Yekaterinburg before the Senegal-Japan game when the incident went down.

The first incident took place before the Egypt-Uruguay game on June 15. She also revealed in a Globo article, that while she hasn’t experience harassment in Brazil, a lot of her colleagues have and said on-air harassment of female sports journalists is a big issue in her home country. Many women face attempted kisses, aggressive physical contact, denigrating language and even violent threats while on the job.

There was even a recent march where several Brazilian sports journalist banded together to launch the campaign called ‘let her work.’

You can check out Julia Guimaraes on Instagram here.