Fern’s English soccer star beau played until recently for Leicester City, the defender has been dubbed the most expensive following a transfer for £85 million to Manchester United.

Jacob Harry Maguire was born March 5, 1993; he joined Hull City from Sheffield United for £2.5 million almost five years ago. At the begining of his professional career he struggled to make the Hull team, he was sent on loan at Wigan Athletic in February 2015. He only became a first team regular at Hull under Mike Phelan at the start of the club’s 2016-2017 season. Leicester paid just £17 million from Hull City two years ago for Maguire.

Maguire will not be the only one changing teams, it seems Harry’s girlfriend will have to go from Leicester City wag to a Man Utd wag. 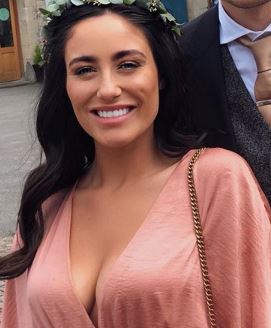 The 26-year-old has been in a relationship with Fern Hawkins since 2011. Though the two are yet to be married they certainly are committed to each other and have already become parents. The two have been engaged since 2018.

Fern Hawkins gave birth to the couple’s first child earlier this year. Hawkins gave birth to a daughter whom the couple named, Lillie Saint Maguire. The 25-year-old mother of one is well known as the girlfriend of her famous soccer player boyfriend and now baby daddy, however Fern has also amassed more than 20,000 followers to her Instagram account and is often described as a social media starlet.

Fern Hawkins was born July 23, 1994; the brunette gained massive popularity as a model of chic and often glamorous fashion as well as a lifestyle photoblogger. She keeps active on social media often posting snaps with her beau and their lavish travels around the world, including a trip to the World Cup in 2018.