Bernadien Eillert is the stunning and loving wife of professional footballer, Arjen Robben. Her husband is a Dutch winger who currently plays for German club Bayern Munich.

Bernadien’s hubby was born Arjen Robben on January 23, 1984. He began his professional career at age 16, playing for Groningen. His career is well documented.

He was a talented footballer from a young age. During his time in the Local Club FC Groningen, he developed his technique of cutting in from the Right.

In 2002 he started his career at FC Groningen. He was transferred to PSV. In 2004, he was transferred to Chelsea Football Club. The transfer amount was €18 million. He played a key role at Chelsea. He won back to back Premiere League titles in 2005 and 2006.

He played and two seasons for Real Madrid beginning in 2007. His first season with Madrid earned him a La Liga trophy. He then moved on to play with Bayern Munich in 2009. That same year, he was named Footballer of the Year in Germany.

With his move to Bayern he was successful as he won the Bundesliga, DFB-Pokal and UEFA Champions League. He scored the winning goal in the Champions League Final against rivals Dortmund. Arjen Robben was a key figure for Netherlands to reach the final of WC 2010.

In 2013, he became a member of the Netherlands national team. Netharlands again reached the semifinals of FIFA World Cup 2014.

Arjen has been happily married to his high school sweetheart, Bernadien Eillert for years. Meet Mrs. Robben below.

Bernadien Eillert met her future husband while in high school in the city, at the Kamerlingh Onnes. They tied the knot in June 9, 2007. Since then they have expanded the family, adding three children: two sons and one daughter. 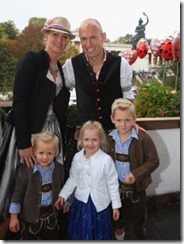 Bernadien Eillert first gave birth to a son, Luka in 2008. She welcomed daughter Lynn, in 2010. The family welcomed another son Kai, in 2012.

There is a sweet anecdote concerning Bernadien and her man. Accoridng to his former youth coach, he once arrived late for practice and Bernadien was the reason. When asked if the girl was worth it, Arjen told his coach, she was.

The lovely wag and mother of three works for Fondation ‘Stichting Aktie Benin’ (FSAB). However, with her hubby’s millions she really doesn’t need to work.