Andrea Salas is the hot Latina wife of Real Madrid goalkeeper Keylor Navas; married since 2009 the two make for one of the hottest couple’s in this year’s champions league.

Andrea’s hubby was born December 15 1986, originally from costa Rica. He took his first steps as a player at Deportivo Saprissa in his native country. While playing with Saprissa he won two league titles, two winter and two summer championships, as well as a CONCACAF Champions Cup.

In 2010 he signed for Albacete and, after an outstanding season there, he moved to Levante. 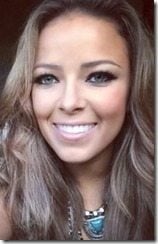 1. She if a former model

Salas was crowned Miss Hawaiian Tropic in 2006. She posed for a number of publications in her country, including the magazine SoHo.

2. Andrea Salas is a Christian

Salas and her husband both met while attending the same Christian congregation in the Costa Rican city of Santa Ana.

3. She turned her back on modeling to look for inner peace.

Andrea who felt like something was missing in her life and wasn’t entirely happy, decided to try spirituality and enter the Christian group where she met Navas.

Salas and Navas walked down the isle on December 25, 2009 in their native Costa Rica.

5. She was previously married.

Andrea Salas is the mother of one daughter named Daniela, product of a previous marriage that ended in divorce.

Andrea and her soccer stud are the proud parents of son Mateo, born in March 2014.

While living in Valencia with her husband and children, Andrea Salas studied web design and subsequently became in charge of her hubby’s public image.