Amelia’s hubby is a central defender for Spanish club Atletico Madrid and the French national team. Hernandez was born February 14, 1996; he is the son of Jean-Francois, also a footballer.

Born in Marseille, Lucas played for France at youth level from Under 16 to Under 21, but moved to Spain at just two years of age when his father, was transferred to Galician club Compostela.

Lucas made his debut for Atletico in 2014, at the age of 18. He’s been involved with Atletico for the last four years and is considered a future star at the club. According to SI, he’s made 73 appearances for Atletico, but is yet to make any scores. He was also a late substitute in the 2016 Champions League final. 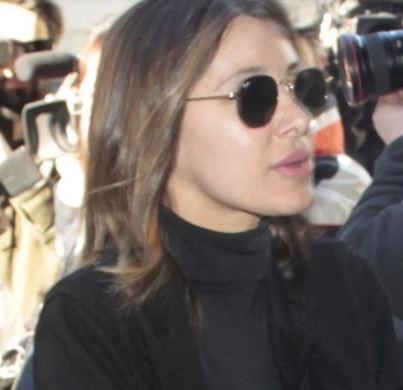 Lucas and Amelia Ossa Llorente have been together for years, however the couple have lead a controversial relationship. In early 2017, the two got into a fight in the middle of a street in Spain. As a result Hernandez was ordered by a judge to stay 500 meters away from her during six months and Lucas was found guilty on two counts.

The couple made headlines again after, getting married despite having the 500-meter restraining order on their necks. Amelia Ossa Llorente and then, 21-year-old Hernandez were hitched last June, four months into their six-moth restraining order sentence.

Following their Las Vegas nuptials, Amelia Ossa Llorente and the soccer player headed to the Bahamas to celebrate their honeymoon. The couple’s happiness was soon tainted after Hernandez was arrested upon their arrival to the Spanish airport.

All these legal adventures however, seem to be behind Lucas Hernandez and Amelia Ossa Llorente. But, as it is understandable, she is not very keep to appear on social media. An old Facebook page shows she has a number of tattoos on her body, including some on her left arm and backside.