Natacha’s man is also a player with country’s national team. She is probably the player’s most loyal and biggest fan, Natacha has been around since they were teens. The two met while attending high school and have been pretty much inseparable.

As you may know, Natacha and Eden bonded over their shared love for the sports. While in high school, she was an avid soccer player who enjoyed playing chess and badminton as well.

Nowadays, Natacha Van Honacker isn’t only a proud soccer Wag, she is also the mother of the couple’s three children. She gave birth to the couple’s first child in 2010. Two years later in 2012, the couple had a private ceremony. Since then, they’ve welcomed two more additions into the family. 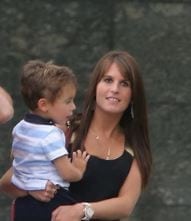 Though is safe to say she keeps busy with her kids at home and her man on the field, Natacha Van Honacker also known as Natacha Hazard –pretty much leaves all the glory to her soccer beau. She is not much of a media fan and prefers to stay out of the spotlight. In fact, she is known for being a private person.

Unlike the average Wag, Natacha keeps to herself, however what she does share in common with other soccer wives and girlfriends is her undeniable support for her husband, often appearing with her children at matches to cheer him on. When not cheering for Eden at some game, Natacha Van Honacker spends her time cooking for her kids, something she enjoys a lot.