Cindy and her new man have yet to confirm the relationship however they were caught together in Barcelona. They reportedly flew to Barcelona together in his private jet. If that isn’t a romantic ride we don’t know what is!

34-year-old Hamilton took Formula 1 by storm when in 2007 he lost out on the world championship by a single point – remains one of the most remarkable rookie campaigns in history.

The stunning Cindy Kimberly was born November 16, 1998; she is a model who was put on the map by non-other than Justin Bieber –after he was boy crushing on her a few years ago.

Back in 2015, Justin posted a photo of her on his feed and asked “*** who is this!!!” –at the time she was only 17! Since then, Cindy Kimberly an Amsterdam, Netherlands native who grew up in Costa Blanca, Spain –has gone on to grace the cover of GQ and has modeled for a number of brands. 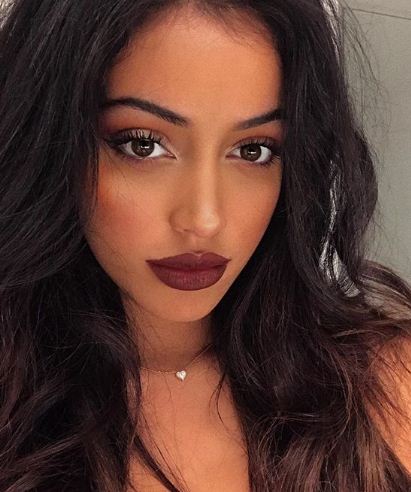 Following Justin’s post, Cindy who previously worked as a baby sitter, became an overnight celebrity. She’s been modeling officially since 2016 and is insanely popular on social media with over 5 million followers.

The brunette beauty was promptly snapped up by Uno Models, which has offices in Barcelona and Madrid. She is currently signed with them. Cindy has certainly been successful at her new career; she’s appeared in fashion shows in Madrid and also booked a contract to be the face of a cosmetics firms.

She’s about to get even more ‘out there’ due to her link to Hamilton. Cindy was previously in a relationship with model Neels Visser.

In Lewis’s case he was in an 8-years relationship with singer, Nicole Scherzinger and has since been linked to a string of gorgeous women including, Kendall Jenner, Rihanna, Nicki Minaj and Rita Ora. However his heart appears to have eyes only for Cindy Kimberly these days.