Katelyn’s hubby has been making headlines after the 27-year-old driver was recorded saying a racist slur during the livestream broadcast of an iRacing event which took place over the weekend.
As a result, the Japanese-American driver has been let go from his gig at Chip Ganassi Racing.

In 2018, Larson tied the knot to the gorgeous, Katelyn Larson. He had popped the question in 2017, after a long relationship. 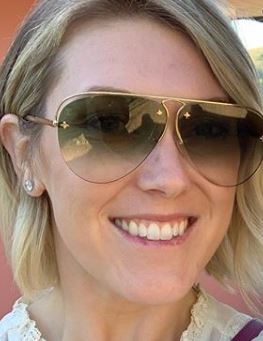 Katelyn Larson was born Katelyn Sweet on July 28, 1991; she is actually the sister of former NASCAR driver, Brad Sweet. It’s safe to say in a way, Katelyn grew up in the business.

In her younger years, she rode horses competitively and is now currently into running marathons. According to her social media she attended Bear River High School.

Katelyn is known as a consultant and skincare expert. In addition she is a busy mom, the couple has welcomed two children, daughter Audrey and son, Owen. She gave birth to son Owen in 2014, and Audrey made her arrival in 2018.
The racing spouse is quite active on social media and often posts a lot of pictures of her and her family. The mom of two is also frequently pictured attending her husband’s events showing how supportive she is of his career.