Brittany Baca is the lovely and supportive wife of NASCAR driver, Joey Logano.

Her man known as ‘Sliced Bread’ –currently competes full-time in the Monster Energy NASCAR Cup Series, driving the No. 22 Ford Fusion for Team Penske, and part-time in the NASCAR Xfinity Series. The two have been tied down for the last three years.

The Daytona 500 winner has been happily married to wife, Brittany since 2014. Get to know everything about Mrs. Logano below. 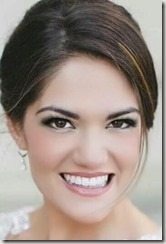 Brittany Lynn Baca was actually born in California but was raised in North Carolina. She was born to mother, Michelle and father, Ray Baca. She has one brother, Kyle Baca.

2. She is a college graduate.

3. Brittany Baca and her husband are childhood sweethearts.

The two met at a skating rink in Charlotte, North Carolina. After several years of dating, the couple announced their engagement in November 2013 and were married on December 13, 2014.

4. She is a regular at most races.

Like most wags, Brittany has become a regular face during racing day. The two have become well known for their Victory Lane ‘selfies.’

5. Before becoming a NASCAR wag, she worked in sales.

Accoridng to her LinkedIn, Brittany used to work as a sales associated at Vera Bradley.

6. Brittany is into traveling.

During interviews, Brittany has talked about her love of traveling saying how much she enjoys the history of places like Charleston, S.C. and Mexico.

7. She has a hard time working out.

The pettite brunette revealed to NASCAR: ‘I have a hard time working out with no push, so I have a trainer twice a week that gets my booty in shape. Outside of that, I love hiking, and Zumba.’

8. She and her husband have no children.

There were rumors of a possible pregnancy a year ago but Brittany and her man are yet to become parents. They do however, own a couple of dogs, Frankie and Luigi.

You can check out Brittany Logano on Facebook here.