You are here: Home / RACING / Who is Candace Muzny’s husband/ boyfriend?

Candace Muzny, well known as a former NASCAR K&N Pro Series driver -is said to have been found dead at her home near Oklahoma.

Candace’s body was found earlier this week inside her Ski Island home near Oklahoma City, Oklahoma. According to authorities, there were no obvious signs of a homicide. She was 43-years-old.
Reports say the medical examiner’s office has determined the cause of death as accidental drowning.
Her death comes a month after she was arrested and charged for allegedly punching a metro nail technician for not speaking English. She was also accused of cutting the responding Oklahoma City Police officer with a knife. She had been out of jail for just a few days.
This was not Muzny’s first offense, she was accused of drunk driving in 2018 and had a number of court cases in the criminal and civil court systems in Oklahoma County. 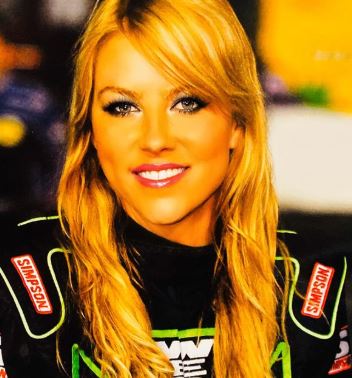 Candace Muzny was born June 18, 1981; the stunning blonde was a regular competitor in the NASCAR Late Model Divisions and NASCAR K&N Pro Series, according to the Bleacher Report. She also participated in the 2007 Toyota All-Star Showdown and 2009 Last Chance Open.
She was once viewed as an up-and-coming racer; she grew up working in her dad’s Oklahoma gas station, and her interest in racing grew from there.

It is believed that Candace was not in a relationship at the time of her death, however she was once engaged. Muzny used to be in a relationship with race car driver, Del Dalrymple.
An obituary for Del Dalrymple says that Candace Muzny was his fiancee. She’s also posted about him on Facebook. He died unexpectedly of natural causes, according to his obituary. He was only 46 years old.

Muzny has since written a few times in his memory on her social media, in one ode to Del she said

“I was going thru some of my old pics and I love these! Not at day not a second goes by that I don’t miss Del Dalrymple ?! I wish that he was still by my side bc those were the happiest times of my life! I am so grateful that I had those years with him bc he changed my stars ? and took a chance on me and forever changed my life for the best and made me a better person by his example and Del was the best human being and the best man I have known! I love u Del ♥️ I wish everyday that u were here with me! Miss u more than words can say!!!”