The blonde who is considered the very first WWF Diva, is currently in jail after reports say she’s been caught drunk driving at least six times.

She and longtime love Candido would often perform together. The two met while in high school and became high school sweethearts. It was actually Candido –who introduced her into the wrestling world. She began traveling with him and in 1992 she signed a wrestling contract. She served as his manager during his career and were together until his death.

He was born Christopher Barrett Candito on March 21, 1972 is; the New Jersey native followed into  his grandfather “Popeye” Chuck Richards –footsteps into the wrestling world. 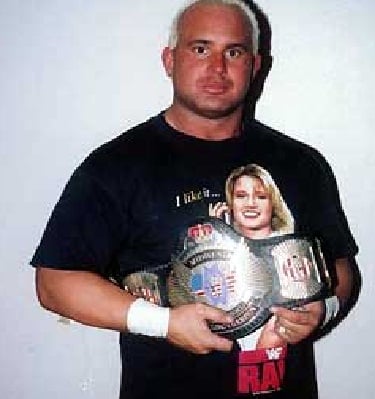 He also achieved success as a professional wrestler. He was known by his ring name, Skip. Candido made his debut in 1986 –he had been training since age 14.

He also performed with Tammy, together were known as the tag team The Bodydonnas. She would also acted as his valet. At the time of his death, Candido was the reigning NWA Midwest Heavyweight Champion. He died in 2005 aged 33 due to complications following a surgery after he broke his tibia and fibula in a match.

In 2015, Tammy was reportedly in a relationship with another pro wrestler, Mitch Valentine. Following her exit from the wrestling world, the blonde who was once “the most downloaded celebrity on the internet” turned to **** –starring in one adult movie.