Jennifer’s legendary hubby may return to the WWE according to reports. If you recall, Hogan got the axe from WWE in 2015 after a racist N-word rant went public –but all that could change in the near future.

If you are a fan, you are aware that Hogan has had a fair share of drama in his life, starting with the nasty divorce between him and ex-wife Linda. He was also internationally shamed when a *** tape surfaced and he has also been criticized for his relationship with daughter Brooke.

However, it seems the new missus, has been able to handle it all. In our eyes, Jennifer McDaniel definitely deserves some credit. 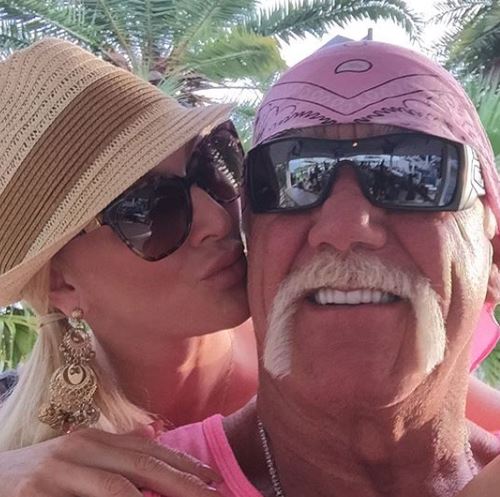 Jennifer –a make-up artists –has been in a relationship with Hogan since 2008, after dating for a few months the two became engaged in November 2009 and tied the knot in 2010. At the time the couple was also criticized for Jennifer’s striking resemblance to Terry’s daughter, Brooke.

Jennifer and Hogan tied the knot at his Clearwater, Florida, home in 2010 –becoming his second wife. At the time of their nuptials, Jennifer was 35-years-old. It was a small wedding with only family and close friends invited, including Hulk’s two children from his first marriage to Linda Claridge – Brooke 30, and Nick, 28.

Jennifer who is 21-years Hogan’s junior, suffered a major blow and their relationship was put to the tests in 2012 when a *** tape staring her hubby and Heather Clem was leaked to media outlets. At the time lovely Jennifer stood by her man.

It appears the marriage of 8-years has endure a lot and we are glad to see they appear to be going strong. The blonde keeps a low profile and is often seen with her man enjoying a number of activities such as shopping and going to the gym together.

According to her IMDb page, she worked in the makeup department for a number of productions.

The couple split their time between Tampa, Florida, and Beverly Hills California.