You are here: Home / Other Sports / Who is Diletta Leotta’s Boyfriend?

Diletta Leotta is a stunning TV presenter who was recently the target of sexist chants.

The gorgeous 28-year-old Italian who works as a sideline reporter, was covering Napoli’s game with Brescia when section of the Stadio San Paolo crowd chanted “fuori le tette” at the reporter – roughly translating into “get your t*** out”.
Leotta’s reaction was to smile and replied by wagging her finger and giving a thumbs down.

Giulia Diletta Leotta was born in Catania on August 16, 1991. The stunner has always been drawn to TV presenting. At age 14, she was a presenter for Antenna Sicilia.

Diletta happens to be a famous juornalist and TV presenter in Italy, in addition she is a social media sensation with over 4.5 million followers on Instagram, but she isnt only a pretty face. The broadcaster, also studied law at Luiss University in Rome, graduating in 2015. She is currently employed at DAZN Italia and Radio 105. 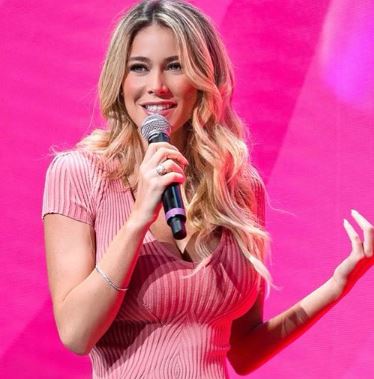 In 2009, she began her career on sports TV after being hired as a presenter of the sports program Salsatampa, the Sunday Sport Siciliana. That same year she was a pre-finalist for National Miss Italy in 2009.
She’s also dabbled into acting making her debut alongside Italian actress Donatella Finocchiaro in the 2009 film Lost Kisses.
Following her college graduation she became known as a weather girl, she began making heads turn as the weather reporter on Sky 24. She later went on to become the sports reporter for Sky sports. She was also voted TV face of year by La Gazette hello Sport in 2015.

The curvy reporter made headlines during the summer by claiming she had left her fiance and was single. She was previously linked to tattoed Italian boxer Daniele Scardina.
Though she is allegedly single, Diletta keeps busy, when not working the blonde hits the gym to keep her great physique in shape. She also enjoys a luxury lifestyle often sharing images of herself with friends.