Becky Lynch is the gorgeous girlfriend of professional wrestler Colby Lopez -whom you probably known best by his ring name, Seth Rollins.

Becky and her man have announced their recent engagement on social media. Seth who was known as Tyler Black as a ROH World Champion -confirmed their relationship over the summer.

Seth is a two-time WWE World Heavyweight Champion and has headlines numerous events and went onto win the WWE Development League’s first NXT Championship.
Check out the top facts about his soon-to-be wife. 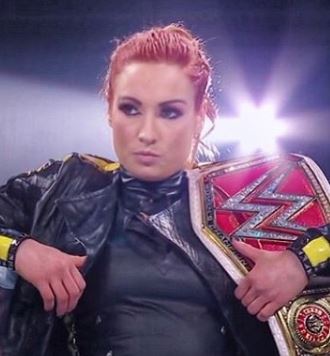 The stunning red-head who goes by ‘The Man’ is also a professional wrestler, the 32-year-old s is currently signed to WWE on the Raw brand. She began her career on the indepents circuit and joined the Canadian promotion SuperGirls Wrestling of Extreme Canadian Championship Wrestling (ECCW). In 2013 Quin signed a two-year developmental deal with World Wrestling Entertainment (WWE) and moved to Florida to report to their developmental territory NXT.
She is a four-time women’s champion in WWE.

Lynch was born Rebecca Quin on January 30, 1987 in Limerick, Ireland. She began training in Ireland as a teen and made her debut a few months later under the ring name Rebecca Knox.

#3 Her brother was also into wrestling

She and her brother Richy began training together and teamed up in mixed tag team matches during the early part of her career. Her brother later wrestled under the ring name Gonzo de Mondo.

#4 She dropped out of college

Lynch studied philosophy, history and politics for a while but ended dropping out. Prior to wrestling she had been “going down a bad path” involving alcohol, but wrestling helped her give it up.

#5 She is also an actress

In addition to wrestling Lynch has appeared in a number of plays. She studied acting at the Dublin Institute of Technology, and also attended Columbia College Chicago.

#7 Her man was previously engaged

This is not the first time the 33-year-old pops the question, Rollins was briefly engaged to Leighla Schultz in 2015.