Telli’s boxing beau will give hard-hitting Cuban southpaw Luis Ortiz a second chance at his title when the two meet inside MGM Grand Garden Arena in Las Vegas this Saturday.

Born Deontay Leshun Wilder on October 22, 1985; the Alabama native has been fighting professionally since 2008. The African American was actually a football and basketball star while attending Central High School, however at 19 while in Shelton State Community College he had to quit shcool in order to take care of his baby daughter who was born with a birth defect.
He began his amateur boxing career around 2005 and three years later he debuted in a victorious fight against Ethan Cox.
Best knonw as ‘The Bronze Bomber’ -was the only American boxer to win a medal at the 2008 Summer Olympics.
He won his first professional boxing fight in 2012; since then he boasts 40 fight wins and is a two time Premier Boxing Champion and currently holds the World Boxing Council Heavyweight Title. 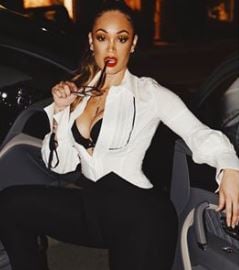 Telli’s man is the father of at least eight children. Wilder and former girlfriend Helen Duncan, welcomed daughter Naieya Wilder in 2005. The boxer is also the father of three children with ex-wife, Jessica Scales-Wilder. The former spouses are the parents of two daughters and a son. He also has a son and a daughter with Telli Swift.

Telli Swift Shuntel was born in the Philippines and raised in Japan. The 34-year-old is a nurse by profession who previously worked at the Beverly Hills Plastic Surgeon’s recovery unit. The stunner is also a model and TV personality who appeared in WAGS Atlanta.
Telli also describes herself as a mother, entrepreneur, speaker, Fashion Designer and TV Personality ????. In addition, she is also the founder of @boxingwagsassociation.

Telli who was born Shuntel Swift -began modeling at a very young age, starting at the age of three years old. During that time, she was picking up jobs that featured her in various magazines as well as participating in beauty pageants as well. She is known for formerly being an XXotic Angels model. She is the creator of Fempowerist – an app to help women empower themselves.