Tevin’s sister is widely known for her success in the all-around, team, floor exercise and vault competitions. Through her run at the Olympics and in World Championship events, she has become one of the most decorated gymnasts in U.S. history.

Her brother however, is quite another story. Tevin is being charged with triple murder. The 24-year-old has been arrested and charged in a New Year’s Eve shooting in Ohio that killed three people. He has been charged with murder, voluntary manslaughter, felonious assault and perjury.
According to reports, Tevin shot mutliple times to Devaughn Gibson, 23, DelVaunte Johnson, 19, and Toshon Banks, 21 -following a fight at an Airbnb in Cleveland, Ohio. The three victims were pronounced dead at the scene.

Tevin was arrested on Thursday in Georgia. He was until his arrest, on active duty in the Army, stationed at Fort Stewart in Georgia. 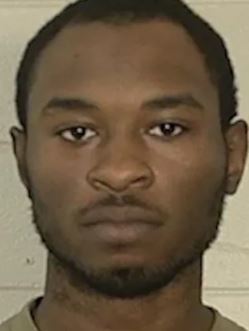 Both older brother Tevin and Simone were born in Ohio but were raised by different relatives. Simone has been vocal about her parents struggles and how she was raised by grandparents Ronald and Nellie Biles, as her mother Shannon Biles struggled with substance abuse. Their father, Kelvin Clemons, abandoned his family and was never present in their life. They have  other siblings: Ashley and Adria.

All of the siblings pent their early childhood going between foster homes and the home of their mother, who struggled with drug addiction. When she was six, Biles and her younger sister were adopted by their maternal grandfather Ron and his wife Nellie, who moved them to Texas. Tevin Biles-Thomas and their other siblings were adopted by Ron’s sister, according to a Texas Monthly profile on Biles.

In 2017, Simone shared a series of snaps on social media of her posing alongside her big brother. She captioned the images “My brother tevin,” “Everyone says we look like twins but we don’t see it.”
An arraignment for Biles-Thomas has been set for Sept. 13 in Cuyahoga County Common Pleas Court.